Hitori “Bocchi-chan” (“Loner”) Gotō is a lonely high school girl whose heart rests on her guitar. She doesn’t do anything every day except strum her guitar alone at home. However, one day she meets Nijika Ijichi, who is looking for a guitarist for his band named “Kessoku Band”.

Bocchi the Rock! is based on Aki Hamajithe four-panel manga and streams on Crunchyroll Saturdays.

How was the first episode? 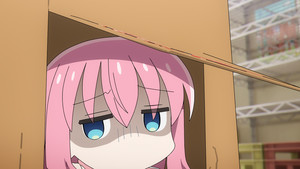 
The most excellent, indeed! I’m pretty sure I’ve said some variation of this phrase at least once or twice a year in every preview guide, but just in case I haven’t reminded someone of it fairly recently: I love it the love stories about forming a band. There’s just something so satisfying and compelling to me about a bunch of weirdos who all have specific (but compatible) musical talents who come together despite their differences to put on one hell of a show. One of the reasons I have such a hard time with a lot of idol anime that I’ve seen is that the focus in these shows is usually never on the specific elements of musical performance and the showmanship that goes into creating a kickass rock-n-roll show. The minute you put electric guitar, bass and drums in my sights, though? So you have my full attention.

What is particularly useful in Bocchi the Rock!The case is that it also has a strong emotional core centered around a sympathetically anxious leading woman’s quest to use her love for music to finally make friends now that she’s entered the high school phase. of his adolescence. Hitori is great not only because she can lay down nasty riffs on her guitar, and not just because she enjoys death metal, but because her anxiety isn’t just some goofy quirk that will be easily resolved once she gets over it. she will have done. band friends. This girl really struggles to connect with people, and as her new almost-friends perfectly say during their first practice jam together, Hitori’s devotion to her musical endeavors won’t amount to much if she can’t get along well enough with their bandmates to actually, you know, play a song.

It means that Bocchi the Rock! delivers one of those ideal scenarios where an awesome premise is paired with a story that can do it justice, not to mention a polished execution that will ensure no one is disappointed in the scenes where Kessoku Band performs their music on stage. Admittedly, we don’t get enough of that performance element to satisfy a greedy fan like myself, although the visual of Hitori playing inside a cardboard box is funny enough to have me begrudgingly expecting that. ‘a true showstopper demonstrates Bocchi the Rock!‘s audiovisual chops. Still, those are small potatoes compared to the feast of cuteness and fair rocking that this show seems poised to give us, so you can bet your bottom dollar that I’ll be standing there in the front row in the weeks to come to see this what these girls can do. 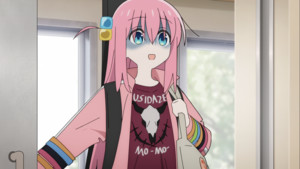 Most of it comes down to our anxious disaster of a heroine, Hitori. While her personality is obviously boosted a bit for comedy, she definitely feels like the kind of nervous, socially awkward kid who would turn to music to forge her identity and make connections. She really loves music, but especially when you’re a teenager, your taste in everything depends as much on the image and lifestyle that pop culture attaches to it. Bocchi doesn’t just want to be a musician – she wants to be a rocker, fill stadiums and look as cool and stunning as the people she sees on stage. But more directly, she wants to appear interesting enough for people to approach her, rather than having to bridge the gaping chasm of social interaction alone. Even filtered through a pretty marketable girl 4 koma setup, she feels like a remarkably authentic representation of the kind of introverted kid who would wear band merchandise and bring their guitar to school in an effort to sound interesting. Not that I have any experience with that, nosiree.

But even if you weren’t a cringe-worthy metalhead in high school, Bocchi – the character and the show – still has plenty of charm to offer. It looks stunning, with the production taking artistic tangents to sell punchlines as often as it meticulously renders the characters’ body language and instrumentation. There are a ton of eye-catching angles used to punctuate jokes or set the mood, or just look cool for a hot second, and it all comes together really well. It’s also downright hilarious, with Bocchi providing the strongest gags. There are of course the big jokes, like the fact that she has to hide in a cardboard box to overcome stage fright, but also little things like the way her gaze instinctively moves to avoid eye contact, or the way of which even his interior monologue can be guessed. It’s not quite up to par. Do it yourself!!, this season’s gift from the anime gods, but it’s an expert introduction in its own right. Basically, my only complaint is that we don’t get to see much of the band’s debut gig because it’s largely set up for a punch line, but I can’t be too upset when the gag is so funny.

I’m going to be frank with you all: it’s nearly impossible for me to be objective about this show. It’s a production so targeted to my tastes and interests that it could very well have been made by the Illuminati as part of a convoluted plan to distract me for the next three months. And mission accomplished: I’m ready to dedicate my life to following Bocchi and the band as if I were their roadie. 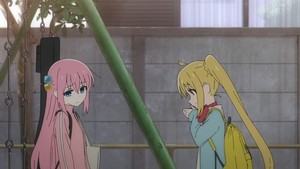 
There is a big pet peeve with whom I have Bocchi the Rock!, and it is that he seems to confuse introversion with social anxiety. The two absolutely co-exist sometimes (look at me – wait, please don’t), but they’re not the same thing at all, and poor Hitori doesn’t seem to realize that. And while she shows signs of being introverted — her comment at the end about being exhausted from too much socializing shows it — most of her problems seem to stem from anxiety instead. Maybe it’s a stupid fuss, but it’s one that’s important to me.

That said, Hitori is an easy-to-follow protagonist. She knows she has a problem (and it’s only a problem because it specifically bothers her) and she really, really wants to find a way to fix it. She would really like to have friends and social interactions with other kids at school, but somehow she just can’t get past her own mental blocks. There’s just something really relatable about her planning of how this time she’s going to be able to do what she’s never been able to do before, and that moment at the end where she realizes that Nijika and Ryo aren’t just listeners to her online persona, they’re fans, that’s wonderful, because that’s when Hitori realizes she hasn’t played in a vacuum for three years and that people, REAL people, really care about her. Mind you, translating this into actual meaningful human interaction is a whole different ball game, but it’s still much needed validation for her. I also like the fact that her new bandmates accept her on stage in a big cardboard box. Of course, they are in a bad position and they really, really need her to play, but they are also ready to work with her. Nijika may think she picked the wrong guitar player randomly on the street, but she’s always willing to help Hitori feel more comfortable.

I may not like the look of the show (although that scene where Hitori quietly sips his drink while his classmates freak out about his demand for death metal is awesome) and I have this nitpick with his presentation of Hitori’s “introversion”, but I think it pulls together an engaging first episode. Hitori wants to help herself, and she deserves to be able to – I hope the music and her bandmates can soothe the voice in her head telling her otherwise. 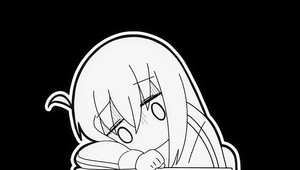 
If you were an outcast growing up, you probably believed at one time or another that if you had a specific item or skill, you would suddenly be popular. And if you then got that item or skill, you’ve also probably discovered that things don’t quite work that way, and it’s more a matter of personality and social skills than anything else. This is unfortunately what our young heroine Hitori will realize during this episode.

Thinking that knowing how to play the guitar would make her stand out, she spent three years mastering the instrument. Of course, it’s not like playing the guitar will suddenly make people want to be your friend, especially when no one even knows that’s what you’ve spent all your free time doing. While learning an instrument can undoubtedly be a conversation starter, you also need to… well, start a conversation. The thing that Hitori completely missed is that just like you have to practice guitar to get good at guitar, you have to have conversations to develop conversational skills. It is not something that happens spontaneously.

Of course, the sad fact is that the anonymity of the internet has allowed her to feel like she’s social without any experience that comes from talking to people. However, even she is able to realize that trying to use parasocial relationships as a substitute for real relationships is far from healthy.

Yet despite all of this, she finally gets the chance to not only join a band and potentially make friends, but also play a live gig. Of course, that’s when she learns that playing the guitar alone all the time is very different from playing with other people, not to mention that her stage fright is so bad she has to play in a cardboard box.

Overall, this is a show about teaching life lessons through comedy. Hitori is still the butt of the joke, albeit in an easily understood way. Many of us have been where she is at one time or another and it’s hard not to want her to succeed. Unfortunately in my case, despite the solid lessons learned here, this kind of squeaky comedy isn’t really my thing. However, if you handle humor, I think you’ll enjoy this one.