IIn the past, Romania’s capital had a bad reputation – known as much for its traffic-choked streets as for its concrete buildings – but over the past decade it has finally shrugged off its Soviet-era chains to rival even Prague and Budapest. Lively open-air bars and trendy cafes now abound, with renowned Romanian chefs such as Alex Petricean (formerly of Copenhagen’s Noma) encouraged to open restaurants in their own turf. And despite the efforts of the country’s former dictator, Nicolae Ceausescu, to bulldoze entire swathes of century-old buildings, it’s still possible to glimpse the capital’s former glory in its venerable museums and hidden, stone-covered villas. terracotta. These days, Bucharest is one of the most affordable city breaks in Europe – Romania uses the leu rather than the euro – and that combined with daily flights from London and an imminent new twice-weekly route from Cardiff means now is the perfect time to go.

▶ The best way to get your bearings is on a walking tour. A private walk with a local guide reveals key sites, including the balcony on which Ceausescu gave his last speech and the former secret police headquarters, which bears bullet holes from the time of the revolution ( £55pp; urbanadventures.com).

▶ Thirty years ago, Vacaresti – an unfinished neighborhood on a reclaimed marsh – was abandoned when the Ceausescu regime fell. Nature has thrived since and thanks to volunteers, this 450-acre nature park is now a protected urban wetland where you’ll find otters, over 180 species of birds and a tree planted by King Charles III (free; parcnaturalvacaresti. ro).

▶ In the northeast of the city, the daily Piata Obor food market is the best place to try Romania’s skinless mici sausages. There’s been a market here since the 1940s, but the current hall was opened in 2011 and is full of fruit, vegetable, cheese, and meat counters, mostly from local farmers and producers (urbanadventures.com).

▶ The National Museum of Art is housed in a gargantuan columned building that was once the royal palace. Its cavernous rooms are generally uncrowded and contain collections of medieval religious iconography rescued from demolished churches in Bucharest, as well as works by Nicolae Grigorescu, considered the founder of modern Romanian art (£4; mnar.arts.ro ).

▶ With ancient elephant skeletons and reconstructed wildlife scenes, the Grigore Antipa National Museum of Natural History is a surefire hit for families. Exhibits include migratory birds and early tribes with practical explanations in English (£3.50; antipa.ro).

▶ The Village Museum is an open-air collection of buildings culled from across the country that have been reconstructed by Lake Herastrau to the north of town. From watermills to grass-roofed huts, this is a fascinating insight into Romania’s rural history (£5; muzeul-satului.ro).

The National Museum of Art

While the residential areas of Tineretului and Floreasca are on the rise, right now downtown Bucharest is on the rise. During the pandemic, bars and restaurants have been allowed to overflow onto the streets – these outdoor tables have remained blocked and, on Saturday evenings, are lively. The middle of Calea Victoriei is the liveliest place as pizzerias and bars converge. Try sitting in the courtyard of jazz cafe Green Hours, where Romanian Ursus beer is poured from large tanks and there’s live music ranging from blues to Brazilian beats (greenhours.ro).

Where to eat and drink

Kaiamo
After working under chef Ollie Dabbous in London, Radu Ionescu returned home to open his own restaurant. Thanks to its reinvention of Romanian cuisine, Kaiamo appeared on the discovery list of the world’s 50 best restaurants. Theatrical menus include edible pebbles and soft buttered venison (nine-course tasting menu £82; kaiamo.com). 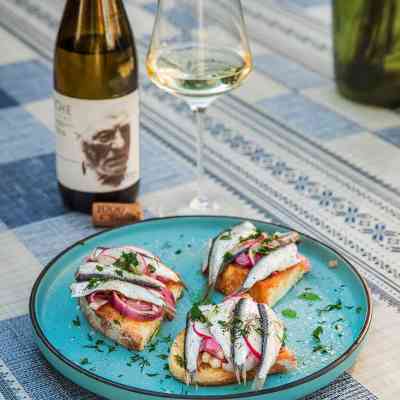 Bucataria
A postage stamp-sized restaurant with concrete walls, dim light bulbs, and a terrace adorned with lights, Bucataria is well worth the 25-minute walk from the old town. A tribute to local comfort food, including soft smoked cheese slathered on just about everything, its menu accompanies a Romanian wine list (mains from £7; Strada Ion Slatineanu 30). Zaganu
A rock’n’roll-inspired playlist and chandeliers made from empty bottles make Zaganu Craft Beer Bar a fun hangout. Besides its own unpasteurized drinks, brewers from all over Romania are represented. Fill your stomach with a hearty menu of nachos and burgers (mains from £6; bere-zaganu.ro). 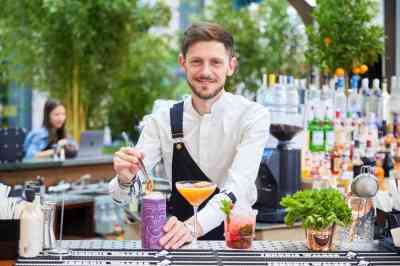 Beautiful downtown
Biutiful predictably translates to “beautiful” and that’s a fair assessment. This downtown bar/restaurant is an Instagram-ready mix of industrial black ceiling pipes and retro lamp shades. After dark, tables fill with hipsters who wave to the house DJ while sipping fruit cocktails (drinks from £2; biutiful.ro).

Rembrandt Hotel
Built in 1925, this 16-room townhouse is located in the heart of the old town. Those looking for late nights will appreciate its proximity to clubs and bars, while tours begin with views of the lavish National Bank of Romania building through street-facing windows (the B&B doubles from 55 £; rembrandt.ro). Hotel Epoque
The grand French facade embodies the nickname Little Paris of Bucharest. All the hallmarks of a five-star hotel are here, from a spa and fully-equipped rooms to a gourmet restaurant, L’Atelier, which reinvents Balkan classics (B&B doubles from £115; hotelepoque.ro).

If you only do one thing

Inspired by its Parisian namesake, Bucharest’s 88-foot-high Arcul de Triumf can be climbed. From the top there are views of the Palace of Parliament – the heaviest building in the world at 4.1 million tonnes (free; ampt.ro).